The animal group card allows us to monitor the events of your herd, such as: feeding consumption, mortality, in and out such as transfers and or sales among others. Also allows you to analyze the principal indexes to follow the development, helping you to make the best decisions for your farm.

Indicates that the index is above the goal (good)

Indicates the index is below the goal (need improvement) 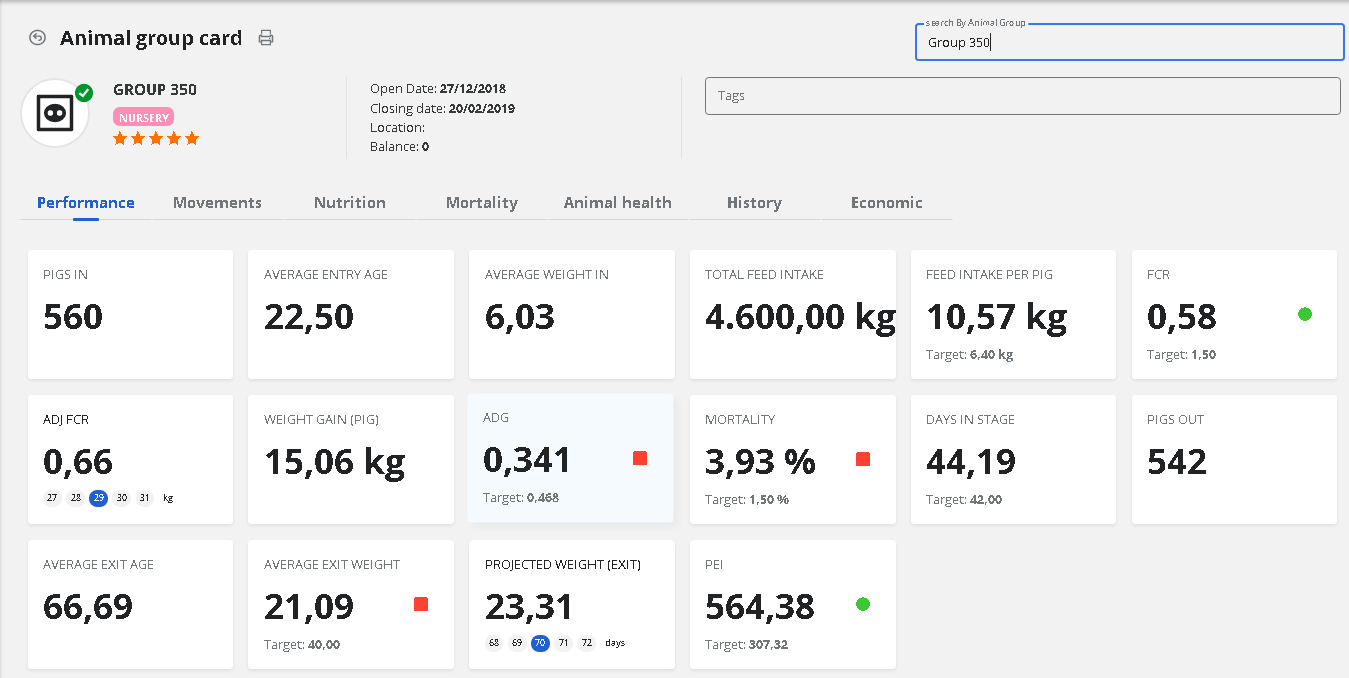 Reports the amount of piglets that entered the group.

For nursery stage the entries are: Weaning, purchase, transfer between groups

For finishing stage the entries are: stage transfer, purchase, transfer between groups

Reports the average weight of the animals that entered the group

Reports the total feeding consumption of the group

The FCR shows how many KG of feed the animal needs to consume to produce one KG of meat. The variation of the index can be derived from the effect of a set of factors such as the composition and availability of the feed, the genetics of the animal, the health factors, among others.

As in FCR, this card shows how many KG of feed the animal needs to consume to produce one KG of meat, having an adjustment factor in all groups in relation to different output weight, in order to compare them. Example: 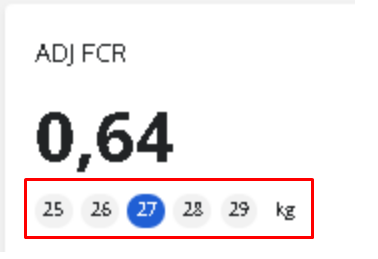 This info allows you to evaluate what would be the feed conversion of the group if the output weight was different.

Reports the weight gain per piglet in the herd. This index also considers the average inventory of animals in the group.

It is an index that displays the daily weight gain of the piglets in the herd.

Available only for closed groups.

Reports the percentage of piglets death in the group

Reports number of days the piglets were in the stage

Sum of the number of animals that left the group.

(Deaths are not counted).

Reports the weighted average age of the animals when leaving the group in a given period. In this index, deaths should not be counted.

Reports the average output weight of piglets in a batch. In this index, deaths should not be counted.

For the termination stage the exits are: sale (normal and fallout pigs), transfer between groups, internal replacement and other exits (donation and self-consumption).

Reports the estimated weight that the piglet will have at a certain age, based on the growth chart. The estimated age for comparison can be selected by choosing the days down below

Available only for closed lots.

Did you find it helpful? Yes No

Send feedback
Sorry we couldn't be helpful. Help us improve this article with your feedback.