Check out the news released on S4 in November 2022 here:

3. Automatic register of reproductive loss in the culling of females

4. News on the transfer between farms functionality

5. Inclusion of padlock in the add weaning screen

6. Improvements in the mating screen

7. Analysis of feed consumption from the group card

1. Performance information on the group summary for Wean to Finish farms

Now it is possible to analyze the evolution of weekly consumption per animal, of all open groups in the farm, separated by stage!

But attention: Only groups that have feed consumption already registered in S4 will be displayed.

The graph will appear as bellow:

See that the all consumption that are above or below the target set by the farm are highlighted.

The weekly cumulative consumption target per animal is set in the farm's growth table, under Farm > Settings > General > Growth curve. 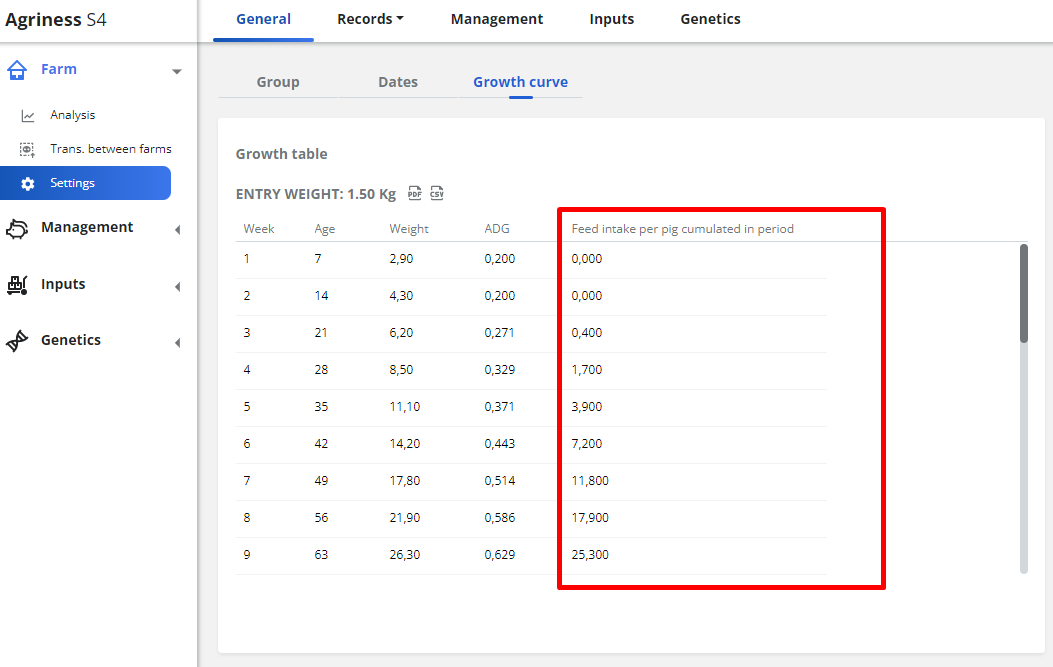 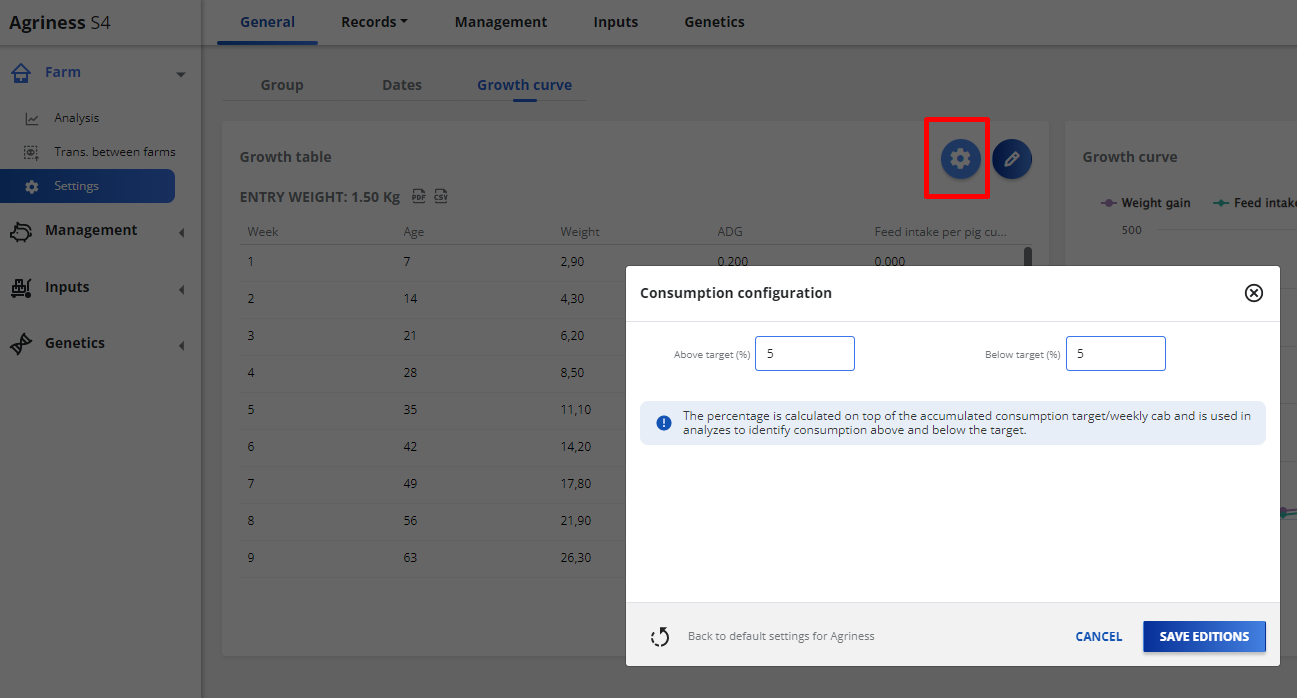 Example: If the target of accumulated consumption/per pig for the week is 23.10 kg.

Don't worry, if you use pounds it will appear correctly as set.

In the table view it is possible to export in ".csv", order and setthe display/hide of the columns.

The analysis allows you to see the performance according to the filters applied. By default the chart will be displayed grouped by month.

a. Select the filter

- The user must select the period or closed groups that he wants to analyze (one or the other).

- On farms that have day nursery and finishing, the stage filter is displayed, and by default they already have both stages. However, if the farm has a single fattening stage (nursery or finishing or wean to finish), this filter is not displayed.

- If the farm has nursery and finishing and the group closure in both stages, it will be counted only once in the total of closed groups.

At the bottom, the list of closed groups that were part of the analysis will be displayed with the economic indicators of the group, total, per head or per kg (unit of weight of the farm).

- The “Stage” column will only be displayed if the farm has a nursery and finishing phase.

3. Launch of automatic reproductive loss in the culling of females

Reproductive loss is an important release that can be done in the traditional way, as we teach you step by step in this Link. However, meeting the needs of our customers, it is now possible to automatically enter reproductive loss at the time of animal culling.

When launching a female discard, the following tip will appear on the screen: 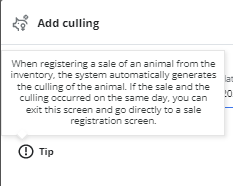 If the female is pregnant and the cause belongs to "Reproductive failures", the following message will appear: 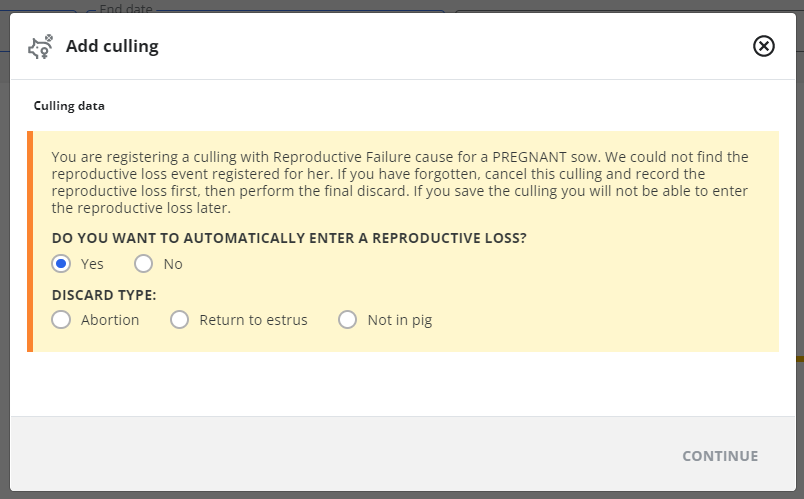 Attention: when deleting a culling that generated an automatic reproductive loss, this loss will also be deleted .

4. News on the transfer between farms feature

The transfer between farms is an operation of moving animals between two farms, done by the output format as sale. In this process, the difference is that the farm that is buying the animals will not need to enter purchases manually, as the system will enter them automatically.  We have a very complete material on this topic! Just click HERE to find out more.

Now, there are new features that help our customers to manage their farms more efficiently:

The farm that bought/received the animals can now refuse a transfer that has a problem, and the farm that sold/delivered the animals will receive a refusal notification and will have the possibility to delete or adjust the transfer and send it back with the correct data.

Just click on the refuse button on the 1st screen of the transfer receipt process, which will display a screen for the user to inform the reason for the refusal. 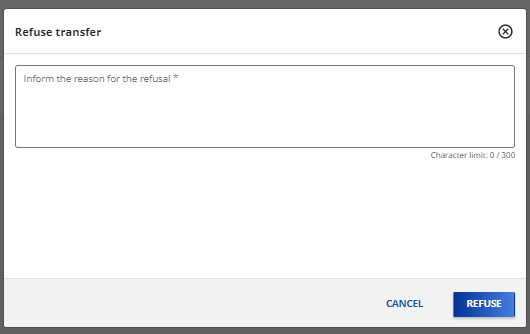 Once the transfer is refused, it changes its status from pending to refused, leaving the list of transfers in the notification of the farm that received the animals.

The farm that sent the animals receives the notification that the destination farm has refused the transfer, so when clicking on view it is allowed to see the information of the refused transfer, as well as the history of refusals.

Attention: None of the 2 farms will keep the history of this transfer, it is as if it had never existed.

Note that when excluding the sale, the stock of animals returns to the group, and the group may be reopened.

If you click on the edit option, the sale editing screen will be displayed, just so that the farm can change: date, amount, weight, value, GTA and invoice.

When saving the information, the transfer is forwarded to the destination farm. 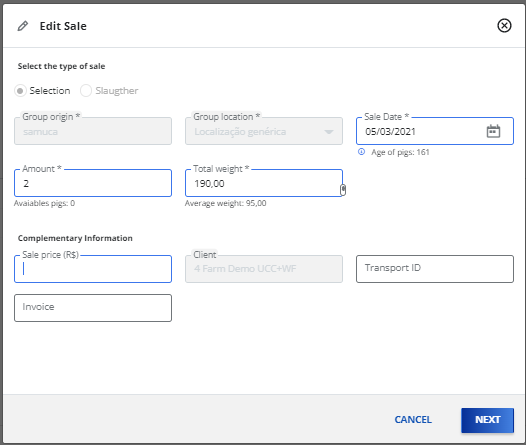 By clicking on host the farm you can start the transfer acceptance process.

If the transfer is a resubmitted transfer because it was previously refused, informational feedback is displayed to the user, as well as the history of declines.

If all information is OK, the farm can continue with the transfer acceptance process.

Now the farm can view the transfers it has received and which it has already housed animals, and those it has sent animals to another farm.

We have filters that allow you to locate the desired transfer: period, type of transfer and customer/supplier. Just go to Farm > Trans. between farms and choose the filters.

5. Inclusion of padlock in the weaning launch screen

Now, when launching a weaning entry, it is possible to observe that the "weaning characteristic" field has a padlock on the right side.

What does this mean? It means that when clicking and leaving the padlock blue, the information will be saved for the next weaning that you add afterwards, making the process faster and more efficient. 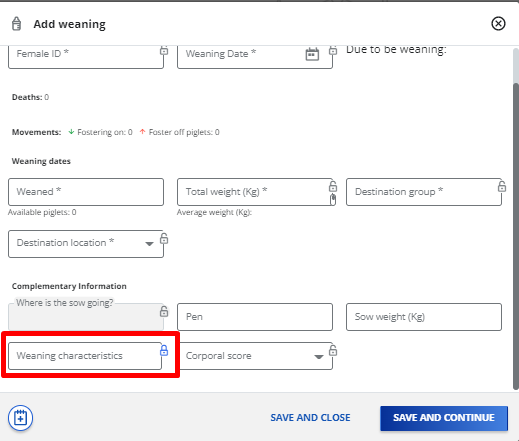 6. Improvements in the mating screen 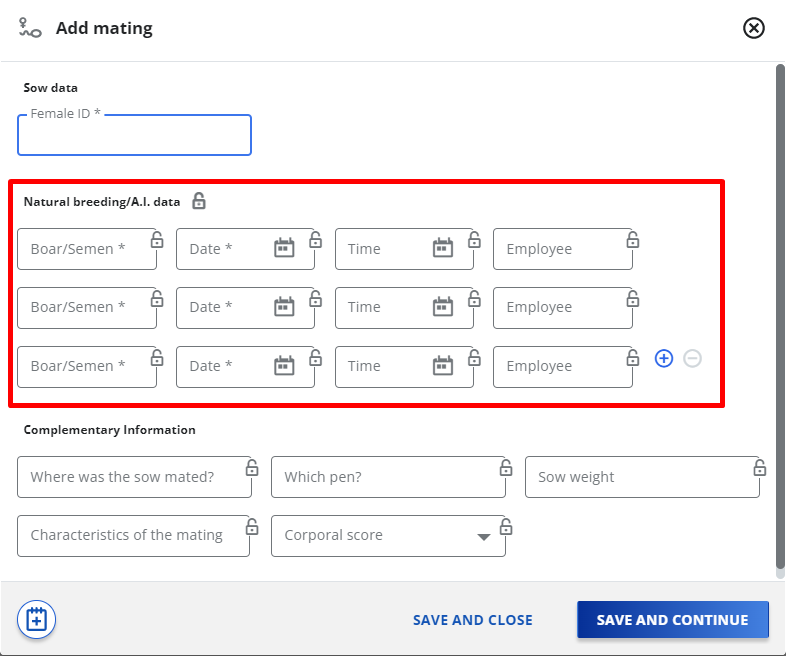 The number of lines displayed when opening the screen will be in accordance with the setting of the target “Number of mounts per mating”, located in Farm > Settings > Management > Breeding. 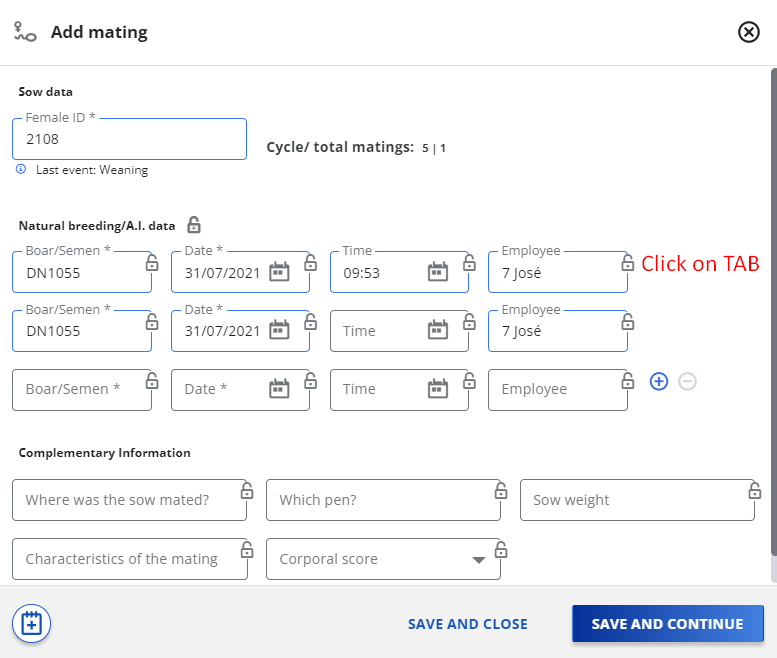 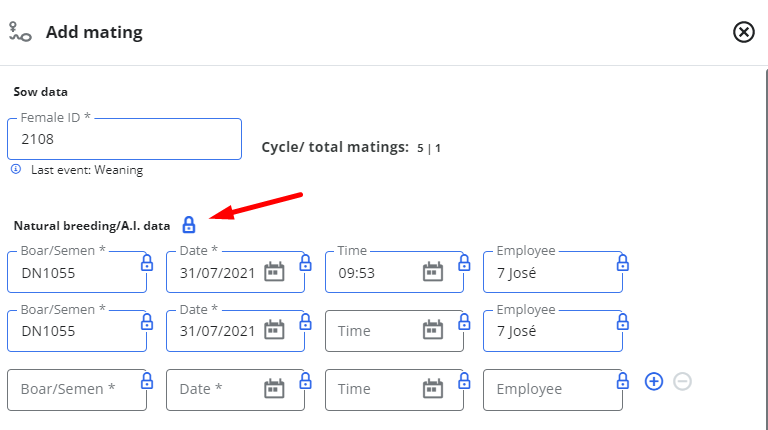 7. Analysis of feed consumption from the group card

Now, in the nutrition tab of the group card, it is possible to check the graph with the accumulated feed/pig consumption, that is, it will represent the evolution of how much feed each animal consumed over the days of accommodation in the batch. 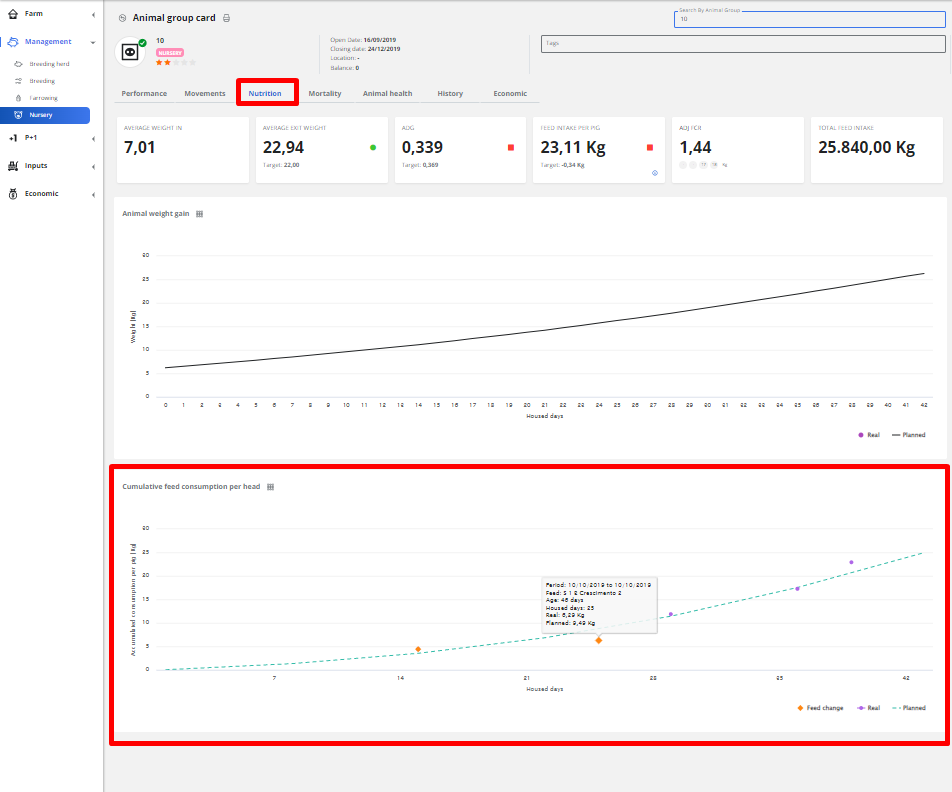 Now the user can compare the “real” consumption of the animals group with the planned consumption.

Planned consumption is obtained from the growth table set up by the farm, based on the average age at which the animals enter the group. Located in Farm > Settings > General > Growth Curve. 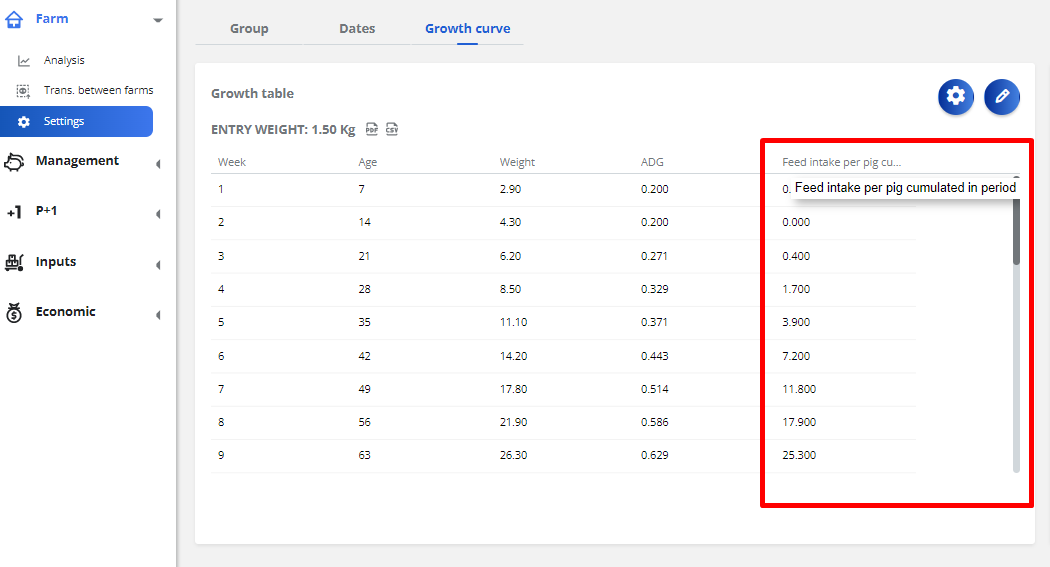 It is also possible to visually identify through the graph the points where feed changes occurred.

When hovering the mouse over any point on the actual or planned consumption line, a tooltip will be displayed with some relevant information for consumption analysis:

If there was a change of feed on the analyzed day, the screen will display information on the 2 feeds: name and period of consumption.

Attention: Scenarios may occur where the planned and real lines show different housed days for the same age group. This situation occurs because to assemble the planned line we use the average entry age and the average age of the last consumption end date. If you have further questions regarding the calculation, please contact us for help!

The user can also visualize all the information displayed in the graph through the table version. Just click on the icon highlighted below. In the table view it will also be possible to export the data in CSV and PDF. 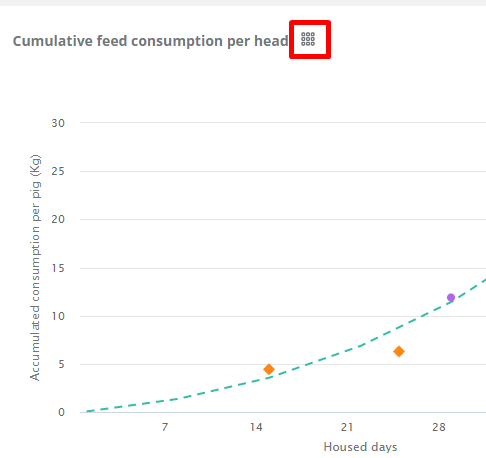 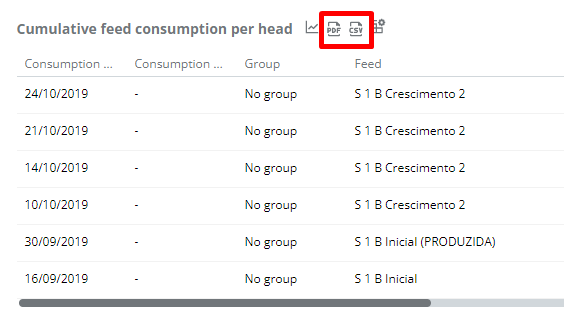 Also, we added an observation on the feed/pig consumption card, as the feed/cab consumption shown at the last point of the graph's actual consumption line may have a slight divergence in relation to the value shown on the general performance card. This divergence occurs due to the criteria used to determine the number of animals that consumed the feed.

1. Performance information on the group summary for Wean to Finish farms

Now, when accessing the batch file, it is possible to access the batch performance information whether it is open or closed. The indicators are the same as we already have for nursery and finishing groups.

Where to check: when accessing the S4 APP, enter the farm and choose an open or closed group. Swipe the "summary" icon down, there you can check all the indicators, as in the example. 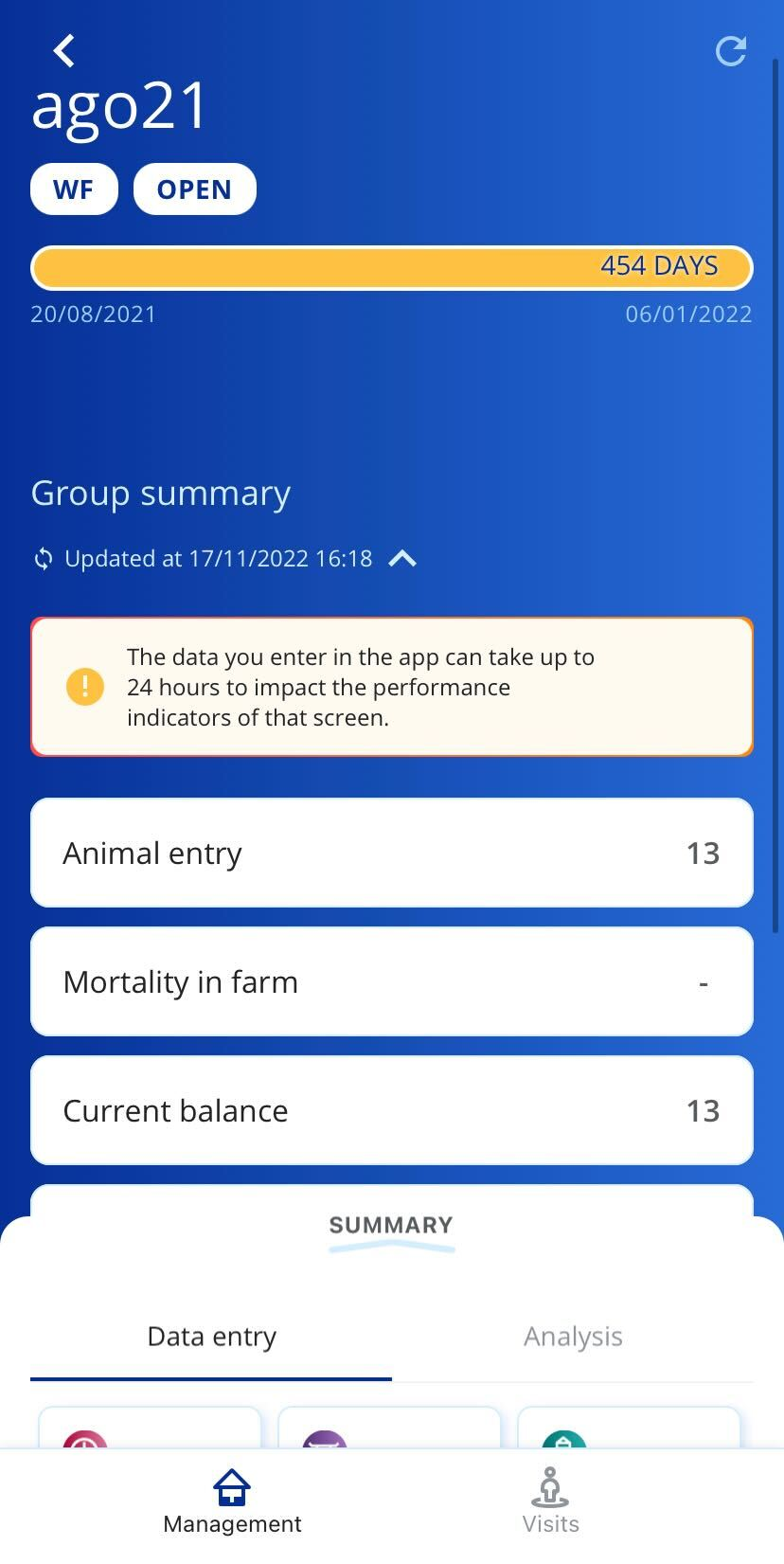 2. Improvement in vaccine and medication consumption

Some improvements were made in the registration of vaccines and medicines, with the aim of serving verticalized and non-verticalized farms, that is, whether or not they have integration with cooperatives. 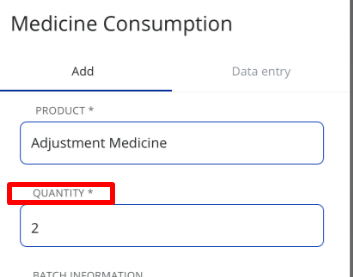 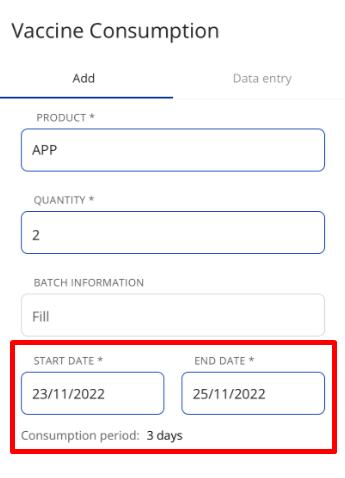 Do you have any questions or want to understand better about any of the news?

Did you find it helpful? Yes No

Send feedback
Sorry we couldn't be helpful. Help us improve this article with your feedback.